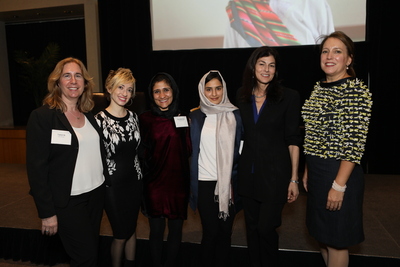 As part of the firm’s continuing relationship with Girl Rising, a global campaign for girls’ education with a groundbreaking documentary film at its center, the New York office hosted a special book launch event on February 28th to introduce award-winning author Tanya Lee Stone’s new book, Girl Rising: Changing the World One Girl at a Time.

Based on the film Girl Rising, the book is a collection of inspiring stories of girls from across the developing world and the formidable obstacles they must overcome to obtain an education and break the cycle of poverty. Guests were provided with a signed copy of the book at the event. Along with Tanya, the dynamic program featured an interactive discussion with Kayce Freed Jennings, the film’s senior producer and founder of The Documentary Group, and Shabana Basij-Rasikh, one of the girls profiled in the book who co-founded the first boarding school for girls in Afghanistan, SOLA (School of Leadership, Afghanistan).

Donna Parisi, head of Shearman & Sterling’s Derivatives practice, co-head of the Financial Institutions industry and a member of the firm's women partners committee, offered welcoming remarks and introduced Kayce, who shared with the audience Girl Rising’s mission and her inspiration in making the film. “When girls are educated, great things happen,” Kayce said, prior to welcoming Tanya.

Tanya discussed the motivation behind her book, stating, “My goals were to expand the depth of these stories in a way that the film couldn’t, so that audiences could get a broader sense of the obstacles these girls faced.” She then read an excerpt from one of the young girls’ stories featured in the book before introducing the panel discussion with Shabana and Uzma, one of the young women who attended SOLA.

Shabana and Uzma participated in a Q&A with two young students, who asked questions about teaching leadership to young female students and the impetus leading to Shabana’s creation of SOLA.

The program was attended by more than 250 firm lawyers and clients, along with their families and friends. The event was also live tweeted to engage the firm’s @ShearmanWomen and @Shearmanlaw Twitter followers and contribute to the Girl Rising fundraising goals. For each post using #MyGirlRising before March 15, Random House is donating $5.00 to the campaign.

The successful program also provided an opportunity for the firm’s clients to connect with each other while supporting the Girl Rising campaign and supporting girls’ education.

Many of the guests said they were enlightened and moved by the engaging discussion, and several expressed a desire to get more involved in both the Girl Rising and SOLA causes. One of them remarked, “Kudos to you for aligning yourselves with such an amazing cause.”

Shearman & Sterling continues to support Girl Rising and SOLA in achieving their mission of empowering girls and women globally. The firm is currently assisting Girl Rising with the translation of their high school curricula into six languages, reaching countries throughout the world and touching the lives of millions. The firm is also providing assistance with the organization’s campaign in Latin America.