In the transition to cleaner and more secure domestic energy sources, offshore wind presents a significant opportunity for local economic growth and job creation. Notably, on June 8, 2021, the U.S. Department of the Interior (DOI) announced its intent to assess potential opportunities to advance clean energy development on the Gulf of Mexico Outer Continental Shelf. This article discusses opportunities and challenges for offshore wind in the U.S., the Biden administration’s goals, and a comparison of offshore oil & gas leases vs offshore wind leases.

Offshore Wind in the United States

Offshore wind has the significant advantage of being located close to population centers along the coast of the United States. Locating offshore wind farms near populated or industrial areas can help reduce the amount of energy sourced from non-renewable sources. Offshore wind serves as a compelling alternative to long-distance transmission of onshore electricity generation.[1]

Data suggests that over 2,000 gigawatts could be accessed in state and federal waters along the coasts of the United States and the Great Lakes. Though only a portion of the technical resource potential will realistically be developed, “the magnitude (approximately two times the combined generating capacity of all U.S. electric power plants) represents a substantial opportunity to generate electricity near coastal high-density population centers.”[2]

The National Renewable Energy Laboratory (NREL) evaluated multiple clean energy technologies for resource adequacy, technology readiness and cost competitiveness and found that offshore wind in the Gulf of Mexico has the highest technical resource potential—508 gigawatts.[3] In particular, significant potential lies off the coasts of Texas and Louisiana. “The Gulf Coast States comprise 32 percent of the shallow-water offshore wind potential in the United States, with the highest potential wind resources off the Texas and Louisiana coasts.”[4] It is estimated that, “if current cost trends observed in Europe and the northeast United States …continue, the economics of offshore wind in the Gulf of Mexico over the next decade will approach positive net values in…Texas and Louisiana.”[5] 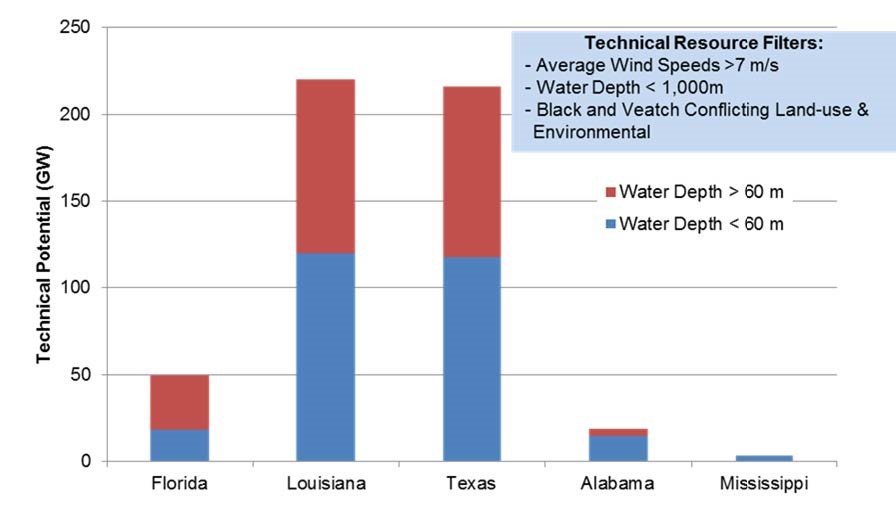 Offshore wind technical resource potential in the Gulf of Mexico[6]

The Executive Order directs the Secretary of the Interior to halt new oil and gas leasing on public lands and offshore waters pending completion of a review of federal oil and gas activities, including climate and other related impacts.[9] In response, on February 12, 2021, the Bureau of Ocean Energy Management (BOEM) announced its rescission of the Record of Decision for the Gulf of Mexico Outer Continental Shelf Oil and Gas Lease Sale 257 (Lease Sale 257). Lease Sale 257 was to be the eighth offshore sale pursuant to the 2017-2022 Outer Continental Shelf Oil and Gas Lease Program. The decision suspends planning for the proposed sale that was expected to occur in March 2021.[10]

Following the DOI’s announcement that it will be assessing opportunities to advance clean energy development on the Gulf of Mexico Outer Continental Shelf, on June 11, 2021, it issued a Request For Interest (RFI) commencing a 45-day public comment period to “solicit indications of competitive interest and additional information on potential environmental consequences and other uses of the proposed area.”[11] The RFI is focused on the Western and Central Planning Areas of the Gulf of Mexico offshore, the states of Louisiana, Texas, Mississippi, and Alabama, and the primary focus of the RFI is on wind energy development.[12] The deadline for submissions related to the RFI is July 26, 2021.[13] Following the public comment period, BOEM will review the information received from the RFI to determine its path forward with respect to the renewable energy leasing process in the Gulf of Mexico. Depending on the feedback received, BOEM will either proceed with a competitive lease sale or issue a non-competitive lease.[14] As part of the determination process, BOEM held its first Gulf of Mexico Intergovernmental Renewable Energy Task Force meeting on June 15, 2021. The task force includes members representing federal, Tribal, state and local governments from Louisiana, Texas, Mississippi and Alabama.[15] The Task force is intended to bring together members to “coordinate and share information on proposed offshore renewable energy-related activities in federal waters in the Gulf of Mexico.”[16]

The barriers to offshore wind development continue to include the mitigation of impacts on the environment, the technical challenges of installation, and the challenges related to grid interconnection.[20] Environmental surveys, monitoring tools and resources are employed to understand the impact of offshore wind construction on wildlife and marine life. This information can be used to guide energy developers on how to implement sustainable ocean energy projects.[21] Due to the nature of offshore wind projects, there is an increased risk for corrosion and damage to the offshore wind systems. As such, the systems must be designed to withstand the wear and corrosion that results from exposure to seawater.[22] Finally, operating changes and equipment upgrades will likely be required to facilitate and integrate offshore wind on a widespread basis.[23]