Prevailing Wage and Apprentice Requirements for Clean Energy Tax Credits are Coming into Effect on January 29, 2023

PREVAILING WAGE AND APPRENTICE REQUIREMENTS FOR CLEAN ENERGY TAX CREDITS ARE COMING INTO EFFECT ON JANUARY 29, 2023

On August 16, 2022, President Biden signed the Inflation Reduction Act (the “IRA”), which included provisions for clean energy tax and climate tax incentive credits for taxpayers – generally builders, developers and owners of clean energy facilities - that require prevailing wages be paid to employees and that registered apprentices are utilized for the construction of energy efficient commercial and residential buildings, electric vehicle charging infrastructure and other clean energy projects. The tax incentives under the IRA are structured in two tiers: a base rate and a higher rate (also known as a “bonus”) that is five times the base rate when certain requirements are met.

The higher (more beneficial) rate will generally only be available to taxpayers with respect to a qualified facility, property, project or equipment (solar, wind, H2, CCUS), referred to as a ‘‘facility,’’ where the taxpayer “begins construction” on such facility on or after January 29, 2023, if the taxpayer meets the prevailing wage and apprenticeship requirements under the IRA. A taxpayer can benefit from the higher tax benefits with respect to a facility without having to comply with these requirements if the taxpayer “begins construction” on a facility before January 29, 2023.

On November 30, 2022, the Internal Revenue Service (the IRS) published a notice, “Prevailing Wage and Apprenticeship Initial Guidance Under Section 45(b)(6)(B)(ii) and Other Substantially Similar Provisions,” (the “Notice”) to provide guidance on the specific labor standards that taxpayers must meet to qualify for the enhanced clean energy and climate tax incentives under the IRA. The Notice also provides critical guidance on the meaning of “begin construction” for those taxpayers seeking to establish that they are not subject to the wage and apprenticeship requirements for facilities already underway. There are two methods that may be used to establish the beginning of construction: (1) “the physical work test” and (2) the “five percent safe harbor”. Under the physical work test, construction begins when physical work of a significant nature begins. Under the five percent safe harbor, construction has begun if the facility has paid or incurred five percent or more of the total cost of construction.

Applicability of the Wage and Apprenticeship Requirements

The wage and apprenticeship requirements apply to the tax credits enacted or amended by the IRA as follows: 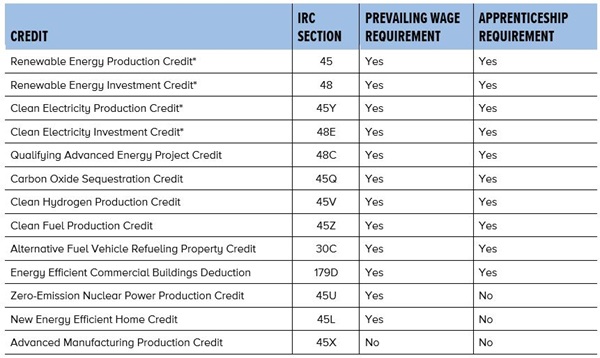 * The credits under Sections 45, 48, 45Y, and 48E are not subject to the wage and apprenticeship requirements if the applicable facility has a maximum net output of less than 1 megawatt.

Specifics of the Wage and Apprenticeship Requirements

The IRA requires taxpayers seeking a credit to provide laborers and mechanics employed in the construction, alteration or repair of a facility with wages at rates not less than the prevailing rates of similar employees for similar type of work in the locality in which such facility is located, as determined by the Secretary of Labor. The Department of Labor’s Wage and Hour Division posts labor classifications and their prevailing wage rates in wage determinations on http://www.sam.gov. If there is no published prevailing wage determination for a particular geographic area and type of construction, the taxpayer must proactively request a wage rate or wage determination by contacting the Department of Labor, Wage and Hour Division via email at IRAprevailingwage@dol.gov.

The taxpayer must also maintain sufficient records to establish that its laborers and mechanics were paid wages not less than such prevailing rates. Such records could include, but are not limited to, documentation identifying the applicable wage determination, the laborers and mechanics who performed construction work on the facility, the classifications of work they performed, their hours worked in each classification, and the wage rates paid for the work.[1]

As noted above, taxpayers that begin construction prior to January 29, 2023, may still benefit from the higher tax credit rates without having to comply with the wage and apprenticeship rules. Taxpayers may use the following methods to establish that construction has begun: (i) starting physical work of a significant nature (“physical work test”) or (ii) paying or incurring 5% or more of the total cost of the facility (“five percent safe harbor”).

The “beginning of construction” standard is not new for taxpayers—for instance, the IRS has based the availability of tax credits for solar, wind and carbon capture projects on the year in which construction of a project began. The IRS previously issued a number of project-type specific notices (“previous notices”) for such projects under IRS Sections 45, 45Q and 48 that explain how a facility could “begin construction” in the context of these projects. In the Notice, the IRS refers to these previous notices for determining when construction commences under IRS Sections 30C, 45V, 45Y and 48E and when installation begins under Section 179D.

Under the physical work test, construction begins when physical work of a significant nature begins, as long as construction, or efforts toward construction, are continuous. This test focuses on the nature of the work performed, not the amount of work or the costs incurred to date. There is no set threshold of work required to satisfy this test. Physical work does not include preliminary activities (e.g., planning or designing, securing financing, exploring, researching, obtaining permits, licensing, conducting surveys, preparing environmental or engineering studies or clearing a site). Work performed by or for a taxpayer by other persons under a binding written contract can be considered when determining whether construction has begun.

Under the five percent safe harbor, construction is considered to have begun on a facility if: (i) a taxpayer pays or incurs 5% or more of the total cost of such facility and (ii) the taxpayer continues to advance toward completion of such facility. All costs properly included in the depreciable basis of the facility are considered in determining whether the five percent safe harbor has been met. For property that is produced for the taxpayer by another person under a binding written contract with the taxpayer, property costs incurred by the other person prior to receipt of the property by the taxpayer are deemed incurred by the taxpayer.

For taxpayers that expect to begin construction on facilities on or after January 29, 2023, it is important to be aware of these new wage and apprenticeship regulations and ensure compliance programs are in place. Establishing compliance programs may require significant planning and, in certain instances, additional legal advice, particularly for taxpayers that do not have experience with the prevailing wage rates and government-registered apprenticeship systems. For those taxpayers seeking to establish that they “began construction” on a facility before January 29, 2023, it is critical to be in a position to provide evidence that these projects have begun in advance of the January 29, 2023, deadline.

We expect the Treasury Department and the IRS to issue additional guidance in the coming months to further clarify the operation of the new wage and apprenticeship requirements, and we are actively monitoring these developments on behalf of our clients.

[1] If a taxpayer does not comply with the prevailing wage requirement, the taxpayer can become eligible to receive a credit if the taxpayer corrects the non-compliance by providing backpay to employees, as applicable, and paying a specified penalty to the Department of Labor.

[2] As with the prevailing wage requirement, if a taxpayer does not comply with the apprenticeship requirement, the taxpayer can become eligible to receive a credit if the taxpayer corrects the non-compliance by paying a specified penalty to the Department of Labor.