[T]hey are making a statement about themselves. They’re saying who they are. The clothes on the hanger do nothing; the clothes on the woman do everything. And that is, I think, what fashion is about.

On May 2, 2016, the Supreme Court granted Star Athletica, LLC’s petition for a writ of certiorari on the following question: “What is the appropriate test to determine when a feature of a useful article is protectable under section 101 of the Copyright Act?”

This case arises out of copyright infringement litigation between two competitors in the cheerleading-apparel industry. Petitioner Star Athletica, LLC (“Star”), created in 2010, is a relatively new entrant in the cheerleading-uniform market. By contrast, respondent Varsity Brands, Inc. (“Varsity”) is the world’s largest manufacturer and distributor of cheerleading and dance-team uniforms and accessories—“[n]early every uniform sold or camp attended by high school or college cheerleaders is part of Varsity’s vast empire of pep.”[2] Shortly after Star published its first cheerleading-uniform catalogue, Varsity sued for copyright infringement, alleging that Star’s cheerleader uniforms infringed the copyrights Varsity had registered in its two-dimensional cheerleader-uniform drawings and photos. See two examples of Varsity’s copyright registered designs below: 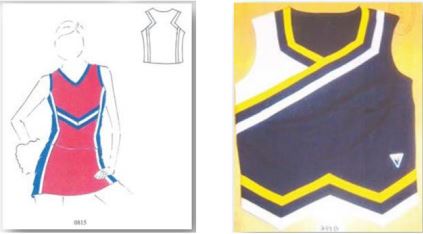 The United States District Court for the Western District of Tennessee determined on summary judgment that copyright protection could not apply to Varsity’s designs because the designs could not be conceptually separated from the utilitarian aspects of the objects themselves.[3] In other words, a cheerleading uniform is not a cheerleading uniform without stripes, chevrons, zigzags, and color-blocks.[4] Varsity appealed.

Star argues, among other things, that the Sixth Circuit’s decision “allows roundabout copyrighting of garment designs masquerading as separable decorative features, preventing competition and inviting new copyright claims for all manner of garments, from band uniforms to everyday apparel, based solely on the arrangement of stripes and color blocks.”[6] Varsity counters that a two-dimensional design—which is squarely within the realm of copyrightable subject matter—does not lose its protection when it is applied to a three-dimensional “useful article,” and that such a “two-dimensional design is ‘separable’ from the three-dimensional article’s utilitarian functions.”[7]

The Supreme Court held oral argument in the case on October 31, 2016. Argument began with colloquies between Mr. Bursch, counsel for Star, and the justices, regarding the utility of the lines, chevrons, and patterns of Varsity’s copyrighted works. In essence, Mr. Bursch argued that these designs make the cheerleading uniforms what they are—they cannot be conceptually severed from the uniform. His argument is not that Varsity doesn’t have copyright protection in its twodimensional images—if someone copied the two-dimensional images onto a lunchbox or made a poster of them, Mr. Bursch believes that Varsity could sue for copyright infringement. Rather, his argument is that applying the images to threedimensional cheerleading uniforms is inappropriate because the designs make the useful article. This argument tracks the district court’s view of the issue:

Here, the court’s focus eventually turns to the “cheerleading-uniform-ness” of a fabric garment without any of the physical designs and colors ordinarily printed upon or otherwise imparted to a garment that identifies it, generally, as an unavoidably imperfect reflection of the ideal of a “cheerleading uniform.” In this case, because the court finds that the absence of such designs and colors simply fails to call to mind, or otherwise signal the presence of a cheerleading uniform in the garment at hand, it must also conclude that the presence of such designs and colors is at the core of the ideal—of “cheerleading-uniformness.” With that conclusion, it also follows that the colors-and-designs component of a cheerleading uniform cannot be conceptually separated from the utilitarian object itself. Copyright protection, as a matter of law, cannot apply.[8]

From the other side, Mr. Jay, counsel for Varsity, began by fielding a question from the Chief Justice regarding whether an original camouflage design could be applied to a military uniform, for example. Mr. Jay hedged his answer by saying that an original camouflage design might be copyrightable separate from a military uniform or hunting gear—to lunchboxes or maybe iPhone covers. The Chief Justice then retorted, “[y]es… you can have a copyright in the pattern; and, yes, you can attach it to a useful article like a lunchbox that’s going to have a design. But the question is when the design is what makes that useful article what it is—the design on a lunchbox doesn’t make the lunchbox a lunchbox.”[9] Mr. Jay attempted to hammer the point that Varsity’s designs are, in fact, separable from cheerleading uniforms as they also appear on warm-ups and jackets.

On the practical side of this case, Justice Breyer discussed whether holding dresses copyrightable will perhaps double the price of women’s clothes. And, Justice Sotomayor remarked that Varsity is using copyright—as opposed to trademark or patent law—to kill the knockoff industry.

Returning to the question presented, there are at least ten unique tests within legal precedent and professorial commentary for determining separability. Star argues in its briefs that none of them are consistent with § 101’s statutory text and thus proposes a four part “statutory-separability analysis.”[10] Varsity counters that Star jams together two pre-existing tests “into something even less clear—but at least as flawed” and that the Copyright Office’s test for separability, which was applied to Varsity’s submissions, warrants respect.[11]

Many commentators believe that the fate of a $300B industry hangs in the balance.[12]