Cheering on the Fashion Industry: U.S. Supreme Court Issues Landmark Copyright Decision That Will Have Deep Implications for Fashion and Sports Industries

On March 22, 2017, the Supreme Court decided that federal copyright protection applies to cheerleading-apparel designs. The decision, which has far-reaching implications for the fashion and sports industries, sets a new and uniform standard for determining whether features of useful articles (such as clothing) are entitled to copyright protection.

This case arises out of copyright infringement litigation between two competitors in the cheerleading-apparel industry. Petitioner Star Athletica, LLC (“Star”), created in 2010, is a relatively new entrant to the cheerleading-uniform market. By contrast, respondent Varsity Brands, Inc. (“Varsity”) is the world’s largest manufacturer and distributor of cheerleading and dance-team uniforms and accessories— “[n]early every uniform sold or camp attended by high school or college cheerleaders is part of Varsity’s vast empire of pep.”1 Shortly after Star published its first cheerleading-uniform catalogue, Varsity sued for copyright infringement, alleging that Star’s cheerleader uniforms infringed the copyrights Varsity had registered in its two-dimensional cheerleader-uniform drawings and photos. See two examples of Varsity’s copyright-registered designs below: 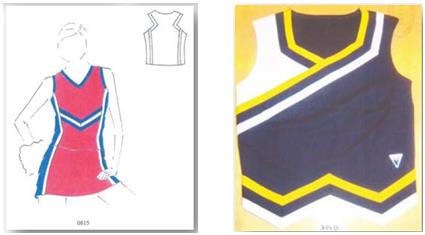 The United States District Court for the Western District of Tennessee determined on summary judgment that copyright protection did not extend to Varsity’s designs because the designs could not be conceptually separated from the functional aspects of the objects themselves.2 In other words, a cheerleading uniform is not a cheerleading uniform without stripes, chevrons, zigzags, and color-blocks.3 Varsity appealed.

And, now, the Supreme Court has affirmed the Sixth Circuit’s decision.5

Justice Thomas, writing for the Court, articulated a two-part test for determining when a feature incorporated into the design of a useful article (such as clothing) is eligible for copyright protection:

[The feature is eligible for copyright protection only if it] (1)
can be perceived as a two- or three-dimensional work
of art separate from the useful article and (2) would qualify as
a protectable pictorial, graphical, or sculptural work—
either on its own or fixed in some other tangible medium of
expression—if it were imagined separately from the useful
article into which it is incorporated.6

Justice Thomas’s legal reasoning is strictly based on statutory construction of 17 U.S.C. § 101, which affords limited protection for the “pictorial, graphic, or sculptural features” of the “design of a useful article” if those features “can be identified separately from, and are capable of existing independently of, the utilitarian aspects of the article.”7 Neither his majority opinion, nor Justice Ginsburg’s concurring opinion,8 comment on the potentially far-reaching implications of the Court’s holding to the fashion world.

By contrast, the dissent, penned by Justice Breyer with Justice Kennedy joining, examines the policy and economic implications involved in the decision. Justice Breyer, in arguing for a narrow interpretation of the majority’s holding, explains that Congress had rejected approximately 70 design protection bills introduced since 1914. But even with these rejections, he explains, Congress had not left the fashion industry without recourse: “Patent design protection is available. . . . A maker of clothing can obtain trademark protection under the Lanham Act for signature features of clothing. . . . And a designer who creates an original textile design can receive copyright protection for that pattern as placed, for example, on a bolt of cloth, or anything made with that cloth.”9 The dissent expresses a fear that the decision will “risk increased prices and unforeseeable disruption in the clothing industry, which in the United States alone encompasses nearly $370 billion in annual spending and 1.8 million jobs.”10

While the adoption of a single test (out of the over ten tests proffered by the parties and amici) to determine the protectable design aspects of a garment may be a confidence boost to the industry regarding their already registered designs, some uncertainty regarding the application of the test remains. Clearly, reasonable people can differ about whether a feature incorporated into the design of a useful article “can be perceived as a two- or three-dimensional work of art separate from the useful article.” Justice Thomas, on the one hand, writes that “one can identify the decorations as features having pictorial, graphic, or sculptural qualities” and that “if the arrangement of colors, shapes, stripes, and chevrons on the surface of the cheerleading uniforms were separated from the uniform and applied in another medium—for example, on a painter’s canvas—they would qualify as ‘two-dimensional . . . works of . . . art,’ § 101.”11 Justice Breyer’s analysis for the dissent, on the other hand, results in the opposite conclusion: “Were I to accept the majority’s invitation to ‘imaginatively remov[e]’ the chevrons and stripes as they are arranged on the neckline, waistline, sleeves, and skirt of each uniform, and apply them on a ‘painter’s canvas,’ ante, at 10, that painting would be of a cheerleader’s dress.”12 Justice Breyer’s analysis is an extension of the Justices’ discussions from the bench at oral argument in which they compared and contrasted the cheerleading patterns to camouflage patterns on military garb.

As explained by various amici and the justices during oral argument, this litigation implicates a variety of real-world issues, ranging from whether clothes could become more expensive to whether the fashion and, perhaps, sports industries will increasingly police their designs through copyright infringement actions.

Regardless, a decision holding the opposite could have meant disaster for the industry—including an invalidation of many companies’ already registered designs as well as heightened scrutiny for future registrations. Now, however, a precedent from the country’s highest court provides confidence in registered designs and an arguable increase in intellectual property protection.