On December 29, 2022, President Biden signed into law The Consolidated Appropriations Act of 2023 also known as The Omnibus Funding Bill (the “Bill”).[1] The Bill includes the Merger Filing Fee Modernization Act[2] which provides for significant changes to the current filing fees under the Hart-Scott-Rodino Act (the “HSR Act”). The Merger Filing Fee Modernization Act brings about the first changes to the merger filing fees since 2001[3] and will add three additional tiers of fees to the current three tier structure. The filing fees for smaller acquisitions are being lowered while the fees for larger deals, in particular deals valued at more than $1 billion, are increasing significantly, from the current highest filing fee of $280,000 to a maximum of $2.25 million. Under the HSR Act rules, the acquirer is responsible for the entire filing fee unless parties agree otherwise. The rationale for these significant increases in fees is to provide the antitrust agencies with additional funding and resources to enforce the antitrust laws.[4]

The current filing fees are based on the below thresholds which are adjusted annually based on changes to Gross National Product.[5]

The new fees continue to be based on deal value but both the fees and transaction value thresholds will be adjusted annually based on the Consumer Price Index as determined by the Department of Labor.[6] We expect that the new fees will go into effect in 2023, though the exact timing has not been determined.

The Merger Filing Fee Modernization Act requires the Federal Trade Commission to publish annual adjustments by January 31 of each year.[7] 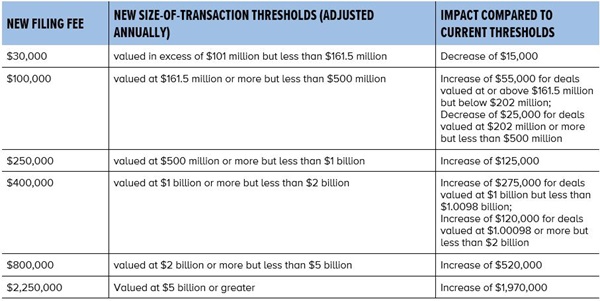 The FTC Abandons (The Rule of) Reason