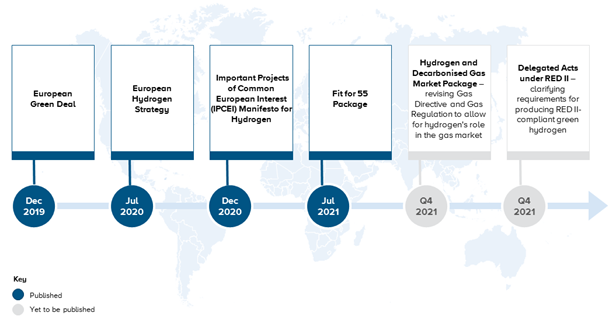 Almost two years ago, the European Commission (EC) published its Green Deal, which mentions hydrogen only three times. Since then, hydrogen has come to the center-stage of the EC's decarbonisation agenda.

The EC’s Hydrogen Strategy followed in July 2020. A year later, on 14 July 2021, the EC tabled the Fit for 55 package, a package of thirteen regulatory proposals designed to steer the European economy towards at least 55 percent greenhouse gas (GHG) emissions reductions compared to 1990 levels by 2030.  Hydrogen is integral to the Fit for 55 package and therefore the EC's vision for a decarbonised European economy.

Is this, then, the beginning of the 'hydrogen decade' in Europe?

The EC's Fit for 55 proposals must now be debated and adopted by both the European Parliament and the Council, whose formal position is expected in 2022. However, prolongation of post-election coalition discussions in Germany and the French presidential elections set for Q2 2022 may cause further delays to this process. It is also not certain that the Fit for 55 package will become law in its current form as it may require detailed negotiations to address the national interests of individual Member States. The timing for Fit for 55 becoming law is therefore uncertain.

Table: Overview of the Fit for 55 Package:

Prior to the Fit for 55 proposals, RED II defined targets for the adoption of hydrogen in the transport sector and set strict limitations on the manner in which such hydrogen could be produced.

Fit for 55 proposes extending RED II to apply to industrial use of hydrogen, including by the iron, steel, aluminum, chemicals, fertilizer (including ammonia), cement and construction industries. Specifically:

The EC is expected to publish two long-awaited Delegated Acts by the end of 2021 to clarify important aspects of the regulatory regime for RED II-compliant green hydrogen. These are expected to:

The existing RED II includes strict sustainability criteria for green hydrogen production, such as demonstrating the additionality of renewable electricity used and imposing conditions on use of existing grids. Extending these requirements to hydrogen used in industry creates opportunities for non-European hydrogen producers to export green hydrogen to Europe, provided their projects are structured appropriately and subject to transport costs. This is because the additionality and grid-related requirements may be easier to satisfy in places outside Europe with lower local renewable electricity demand, abundant land, looser planning restrictions and reliable combinations of renewable resources such as sun, wind, hydro and geothermal power.

The EC's policy proposals aim to gradually strengthen the cost of GHG emissions under the ETS (e.g. by reducing the overall supply of allowances in the system and gradually reducing the number of free allowances that grant industrial installations a certain quantity of untaxed emissions) and expand its scope. In particular:

The EC proposes revising the methodologies for calculating free allocation benchmarks to incentivize decarbonisation (these have already been set for 2021-25). From 2026, green hydrogen producers may be able to claim free allowances under the ETS. However, first, the EC will need to revise the rules which disincentivize electrification in certain sectors.

The CBAM intends to impose a carbon price at the European border to imports of certain products, based on their embedded GHG emissions. It aims to prevent 'carbon leakage': economic behavior caused by the ETS and other European climate regulation in which producers relocate production outside Europe to avoid the increasing costs of environmental compliance.

The CBAM is designed to set an equivalent carbon price on imports to the price that must be paid by European producers under the ETS, thereby maintaining compatibility with World Trade Organization (WTO) non-discrimination rules.

Key features of the CBAM include:

The EC is yet to determine the methodologies for calculating direct and indirect emissions. It remains to be seen how emissions associated with the production of hydrogen used in the supply chain of CBAM products (e.g., ammonia or green steel) will be assessed under the CBAM.

Other Fit for 55 Initiatives

Fit for 55 includes other initiatives which may stimulate wider adoption of hydrogen: e.g., the FuelEU Maritime and ReFuelEU Aviation proposals aim to decarbonise the fuel mix for shipping and aviation respectively.

The EC proposes that European Member States should install hydrogen refueling stations at intervals of max. 150km (under the Alternative Fuels Infrastructure Regulation (AFIR)) and offer preferential tax treatment for the use of clean hydrogen (in the revisions to the Energy Taxation Directive).

The EC is preparing revisions to the Gas Directive and the Gas Regulation, following a public consultation earlier in 2021. The aim of these revisions is to ensure that European gas regulation is suitable for the transition to renewable and low-carbon gases and to prepare the gas system for a phase-out of unabated fossil gases. The revisions will also contemplate more integrated infrastructure planning as well as making provisions for hydrogen imports.

As part of our work on the world's largest green and blue hydrogen / ammonia projects, we are experienced in guiding clients through the complex and evolving regulatory landscape applicable to hydrogen and energy transition in Europe. With this deep understanding, we can help you structure your projects to optimize the opportunities presented by this interconnected regulatory matrix, allowing you to benefit from the up-side available to appropriately structured projects within the European regulatory regime.