Shearman & Sterling Hosts ‘Manning Up: Including Men to Accelerate Gender Equality’ With Ellevate 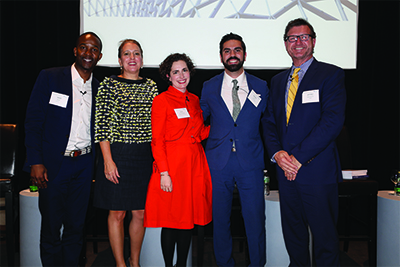 Shearman & Sterling partnered with Ellevate, a global professional women’s networking organization, to host “Manning Up: Including Men to Accelerate Gender Equality” at the firm’s New York office on April 20.

The event was moderated by Jeffery Tobias Halter, the former Director of Diversity Strategy for The Coca-Cola Company and President of YWomen – a strategic consulting company focused on engaging men in women’s leadership issues.

Attracting nearly 80 participants, the program explored how closing the gender achievement gap is not just women's work – it's everyone's duty – and how men can advocate for change and be a part of the solution. The panelists discussed many key topics, including developing and maintaining women’s initiatives, the role of senior leadership in advancing women, and the need for male champions’ active engagement in women’s advancement. “We need to have an uncomfortable dialogue and be forgiving,” said Parisi. “We need to get better at having honest and difficult conversations about what it means to advance women.”

The event concluded with closing remarks by Halter and was followed by networking and cocktails. Many of the evening’s guests expressed that they were empowered to continue the conversation on the importance of male engagement and senior leadership support.

Shearman & Sterling joined Ellevate as a corporate partner in 2013, as part of its commitment to the advancement of talented women throughout the firm and community. Learn more about Ellevate.